Glen has been organising iGEN’s environmental clean-ups since coming on board as Communications and CSR Co-ordinator in early 2022. We first wrote about Glen two years ago, and now, on the eve of our third major CSR event of the year, in support of World Cleanup Day on September 17th, we asked him a few questions around his career, his commitment to the environment and his thoughts about working towards a more sustainable future.

How did you end up working with iGEN?

I have been working with design, advertising and marketing my whole life, both in London and Stockholm, and in 2016 I moved to Malta to work with Betsson’s in-house agency, and spent five and a half years at the company. In my role as Betsson’s head of concept development, I was inducted into the core team at iGEN to work on ideas for a series of videos concerning reputation management, and that is where our collaboration first began. I proposed that we create a dedicated website which, as well as being a platform for hosting the videos, could also function as a portal to promote iGaming in Malta as a career opportunity, and also form a searchable database of all current job vacancies for our member organisations, and whyigaming.eu was born.

After Betsson and I parted company in 2021, I focused on building my own creative consulting business, using my years of experience and my pro network to deliver marketing and design services to companies within iGaming and other global industries. It was a pleasant surprise when, in the spring of 2022, Enrico contacted me and asked if I was interested in working with iGEN again, this time as a consultant taking care of communications but also starting up organised CSR activities for their members, as from our earlier discussions on the subject Enrico knew I was a keen environmentalist. 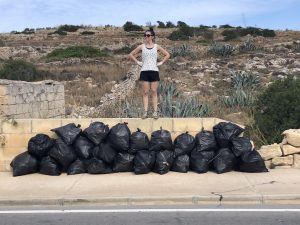 The results of a local cleanup in the Bahar ic Caghaq vicinity – 28 bin bags of rubbish.

What made you decide to get involved in environmental issues?

As a hiker and mountain-biker I have seen first-hand how large areas of the beautiful Maltese countryside have been degraded by the relentless and indiscriminate dumping of rubbish. During the covid lockdown, working from home and with more time on my hands, I began taking daily walks around the country lanes surrounding the village, and I could not ignore the terrible state of the local countryside, and so in May 2020 I founded Bahar ic Caghaq Cleanup, with a focus on documenting and removing litter dumped around my adopted home village on the north coast of Malta. 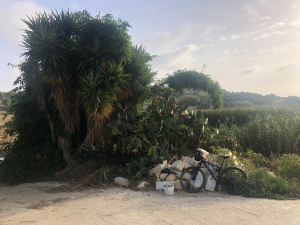 When I am out biking I see the true state of the countryside, and it is extremely concerning

At this time I also organised a couple of small local clean-ups with the help of a few volunteers, among whom was Enrico and his two daughters, so it was natural that he would ask me to organise the CSR initiatives for iGEN, and we identified Earth Day in April 2022 as our first event. This successful first clean-up drew around 60 volunteers from iGEN members and other organisations, and was widely written about in the Maltese press.

The second iGEN clean-up I organised was for World Oceans Day on June 8th, and this time over 80 volunteers cleaned the coast of plastic and other waste from Bahar ic Caghaq to Qalet Marku, and a sister seabed clean-up organised by KFS and iGEN divers took place at Xemxija. The response from our members was amazing, and the positive energy created a great buzz around the event.

The next event is as an official participant for World Cleanup Day on 17th September, and we are hoping for an even greater turnout for our most ambitious clean-up event so far. 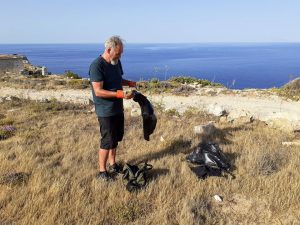 Sometimes we cleaned further afield – this time at Rdum tal-Vigarju

What achievements are you most proud of?

There are a few things. My Facebook page began to draw a lot of interest, especially from other local environment groups, and in the spring of 2022 I was invited to a meeting of like-minded people from nine eco groups at the Atlam Sub Aqua Club, where we each gave a short presentation of our work.

Over the course of subsequent meetings we decided to form an alliance to pool our resources, collect data and support each other in the creation of a manifesto for sustainable development which we could take to the government to demand action. We decided to adopt the name Koalizzjoni għal Futur Sostenibbli, (Coalition for a More Sustainable Future) and the manifesto was published on 2nd August. It feels empowering to be part of a local network of NGOs, rather than just toiling in isolation.

KFS have been active in lobbying the authorities and presenting our concerns, recently meeting with Ramon Deguara, Director of CleanMalta (CMD), to discuss issues around waste collection and gaps in environmental protection efforts. We have discovered for instance that CMD have no authority to investigate illegal dumping or prosecute perpetrators, and have been forced to abandon cases they have reported due to them being in breach of data protection laws – this obviously needs to change. 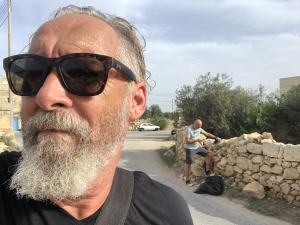 KFS was also granted a 30-minute meeting with Dr Miriam Dalli, Minister for Environment, Energy and Enterprise to push for more investment in infrastructure, education and enforcement around the environment crisis, and less focus on expensive vanity greening projects which look great in headlines but do very little good in reality. Why create artificial green areas if we don’t look after the natural ones we already have? As one KFS colleague put it; ‘They are just making more places for people to fill with rubbish.’

Being able to function as a bridge between KFS and iGEN is probably my proudest achievement, as the local grassroots NGOs have a wealth of local knowledge and experience which, when combined with the power of the iGaming industry to drive visibility and generate publicity, can form a powerful force for change.

What changes have you seen since you first started?

When I first began Bahar ic Caghaq Cleanup it did feel a bit hopeless, and I was not initially aware of any other organisations doing similar work. But gradually I began to get noticed, and locally I became a bit of a celebrity, with people leaving encouraging comments on my Facebook page and others stopping to talk when I was out on my rounds collecting litter. Over time I came into contact with more and more like-minded people and organisations, and now it feels like there is a grass-roots movement focused on creating real change, and unwilling to be ignored or fobbed off with excuses.

My work with iGEN and it’s members has shown that concerns for the environment are widespread in the industry up to the highest levels, with everyone from families with small children to CEO’s rolling up their sleeves and getting involved, and recently we have seen commitment from other NGOs, local councils, government-affiliated organisations, student groups and the private sector wanting to join in and support this work. More and more ordinary people are standing up and saying enough is enough, and understand that change is desperately needed if their children and grandchildren are to have a viable planet to live on. 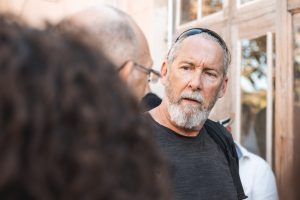 What are the biggest challenges for the environment in Malta?

As I see it, the biggest single problem is that there is no public debate about the state of the environment in Malta. And because a sizeable proportion of Maltese citizens seem at best to be unaware of the problem, or at worst don’t see it as a problem at all, the government does not prioritise it either, which means that there are woefully inadequate resources allocated to combat it. The departments charged with taking care of the environment are underfunded and understaffed, with no policing powers, and there seems to be a widespread lack of motivation, compounded by the fact that the police do not prioritise environmental crime. There is very little education about the risks of unchecked environmental degradation, and the risk of prosecution for being caught littering or fly-tipping is almost non-existent.

Malta has free rubbish and bulk waste collection, and also strict environmental laws, so you would assume that the problem would be diminishing, but with little enforcement of the laws the opposite is the case. People’s attitudes need to change first, in order for real change to happen. It must become socially unacceptable to dump rubbish in the countryside simply because it is convenient and ‘everybody does it’. There needs to be serious consequences for negative behaviour, and proper national education and information campaigns about the very real consequences of not taking care of the environment.  Responsibility for environmental issues needs to sit with a single government entity, not spread over many departments and organisations with overlapping remits and poor or non-existent communication between them.

It might seem that we face insurmountable obstacles, but we just need to keep moving forward, and we have made great strides already. Things are gradually changing, and there is growing momentum, if currently at a glacial pace, so get organised, gather information, form action groups, show by example, take personal responsibility and don’t take no for an answer, and when enough people get involved, we can effect long-term, permanent change.